Article Written by : KeyWordle – All About SEO & SEM 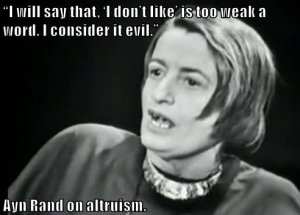 Ayn Rand famously argued that altruism is a position that posits man has no moral right to exist for his own sake. This is a difficult concept for some people to grasp, as it’s not hard to find wealthy people who donate to charities. Are they not also altruistic?

Capitalism is a philosophical set of beliefs heavily reliant on serving the interests of the self. The two concepts could not be further apart.

Bankers in an altruistic society can’t lend, because holding a note of credit over another’s head would be contrary to selflessness. If banks could not lend, they could not make a profit. Banks are central to modern civilization, and have been since the Dark Ages and even before. During those days, the Bible was used as justification to vilify bankers, yet monarchies still used loopholes to make and pay back loans.

Ownership is another concept that cannot exist in an altruistic society, for ownership implies self-interest. Individuals own things and can use them as they please. In an altruistic society all resources are shared and the group decides what happens. This is not only extremely difficult to coordinate; it is highly inefficient for anything larger than small bands of people.

Altruism, in its truest sense, is today a false concept. We exist in a society not only driven by capital, but one that cannot sustain massive self-sacrifice. However, reason dictates that capitalists can perform charitable acts. Even hold altruistic intentions. Yet the inescapable fact is that their behavior is motivated entirely on self-preservation.